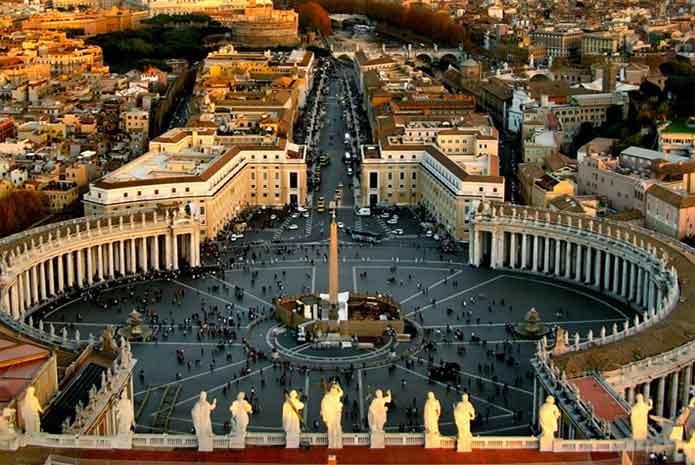 Vatican City is world smallest country and is the holy place of Christians and it is spread over 100 acres. It has its own government which is governed by the Pope. It prints its own Euro, Stamps, issues passports, issues license plates, has its own flag and its own national anthem. It has a population of 842. Vatican City became independent country on 1929 by a treaty between Italy and Holy See which was a jurisdiction of Catholic Church in Rome.

On the entrance of Vatican City first you will be standing on St. Peters Square. It is a large square in front of St. Peters Basilica and Papal Enclave. At the center of the square there is an Egyptian Obelisk which was placed in 1586. The square was designed by Gian Lorenzo Bernini in the year 1655 to 1667 which includes Tuscan Colonnades and A granite fountain. The reason to build the square was to occupy maximum number of people who take the blessing of the Pope. Making this shape, Bernini said “Considering St. Peters to be the matrix of all churches, its portico has to be looked as an open arm which is to welcome all the Catholics around the world.” The square has 284 columns in 4 rows and 88 Pilasters. Around the year 1670, Bernini’s students made 140 statues of saints which are 3.20 mt. high. On the other side of the obelisk which was moved in the center by Domenico Fontana in 1585 are the two great fountains made by Bernini and Moderno. Below the steps the statue of St. Peter and St. Paul welcomes all the visitors.

After St. Peters Square, St. Peters Basilica is constructed by four main artists namely Donato Bramante, Michelangelo, Carlo Maderno and Gian Lorenzo Bernini. It is the most unique work of renaissance period. It is the largest catholic church of the world. St. Peters Basilica is the Burial site of St. Peter who was the Apostle of Jesus Christ and he was the first pope and Bishop of Rome. St. Peter is buried in the center of the Basilica. There has been a church on the site since Roman emperor Constantine the Great. The old Basilica was made in 4th century Ad and the work for new Basilica was started on 18th April 1506 and was completed on 18th November 1626. St. Peters Basilica was made exactly upon the Necropolis (Ancient Burial Ground). The Basilica can have 20,000 people. The Basilica also has some of the most famous art works made by Bernini baldachin, Michelangelo Pieta and many more.

Vatican museum contains masterpieces of paintings, sculptures etc which are collected by the pope from centuries. The museum contains monumental art such as Sistine Chapel, The Raphael’s Room, Borgia Apartment etc. Some famous paintings in the museum are:

Some museums and rooms in Vatican museum:

The Sistine Chapel is the official residence of Pope. It was named after the commissioner Sixtus IV Della Rovere. He decided to built a large room which was fortified in the medieval times where papal court used to assemble. The Sistine Chapel was constructed to be a defensive structure as in the medieval times there was a tension between Rulers of Florence and the Pope and the Turks. Its construction was started in 1475 and ended in 1483. The dimensions of the wall were copied from the great temple in Jerusalem made by Solomon and was destroyed by the Romans in 70 A.D. The walls of Sistine chapel is covered with Biblical paintings some of them are Stories of Moses, Stories of Christ, Resurrection of Christ and the most famous painting is on the ceiling of the chapel made by Michelangelo “The Last Judgment”

Papal conclave is a meeting of cardinals who together elect the Pope. The procedure to elect the pope is the oldest ongoing system of election method. There are different stages for the election of Pope. When the cardinals vote but do not end with up with a result black smoke rises from the chimneys of the Chapel. When the pope is elected white smoke rises from the chimneys. This is a old tradition to inform the people about the result of the election.

In case of Death of Pope:

The death of pope is verified by Cardinal Camerlengo. He strikes the silver hammer on the head of the pope and calls the pope’s original Christian name three times. In 20th century the striking of hammer has been abandoned. The cardinal just declares the death of the Pope in front of Master of Papal Liturgical Celebrations, and of the Cleric Prelates, Secretary and Chancellor of the Apostolic Camera. Cardinal takes the ring of Pope which is called the Ring of Fisherman and is destroyed before the College of Cardinals. This time is called Sede Vacante which mean the seat is vacant. The Conclave takes place after 15 days of the death of the pope.