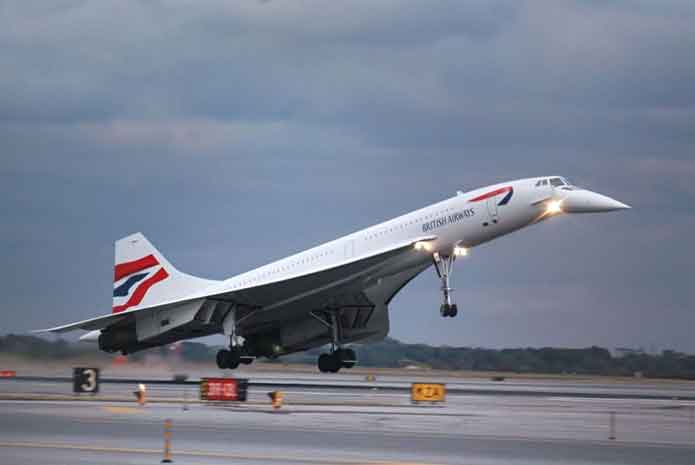 Concorde was the world’s most glamorous British Airline aircraft which flew more than 2.5 million passengers supersonically , i.e., at a speed higher than that of Sound. Concorde had a cruising speed of 1350 mph which is more than twice the speed of sound and it took around three and a half hour from London to New York as compared to subsonic flights which take eight hours for the same. This meant that you would see the aircraft before you heard its sound.  In October 1969, the Concorde had its first public flight where there was a crowd of more than 7.5 lakhs spectators to witness this great innovation of mankind. Due to unforeseen circumstances, the world’s most famous plane had to be brought out of service, first by Air France and then by British Airways – marking the end of supersonic passenger flight.In terms of technology it was pioneer, it had the first computer controlled engine that was more advanced than the engine of spaceship Apollo 11 that took the first man to the Moon.

What brought about the Concorde crash?

On 25 July 2000, Flight 4590 for New York’s JFK airport, carrying mostly German tourists headed to South America was about to take off when it struck a metal strip resulting in a tire burst. The strip had tumbled from the underside of a Continental Airlines DC-10 that had withdrawn minutes prior, which was going toward Houston. The report said that supersonic airliner hit to the 43 cm titanium strip and one of the plane’s tires blast and creating the rubber to fly up and rupture a fuel tank. All 109 passengers and crew were dead including the four people on the ground. The fuel tank flame was the direct reason for the accident and a couple of days prior, the Associated Press was taking it is a common case and what the general people has been perusing and listening from them :”The blast tire sent bits of elastic flying, puncturing the fuel tanks, which began the flame that cut down the plane.” In November 2001, Commercial services were again introduced after 17 Million Euro Safety Improvement Program. In 2003, British Airways and Air France announced plane to be retired.

In the comparison, it was less profitable than other aircraft in BA and Air France fleet. When Concorde was suspended for a short time after the accident in 2001, both the airlines realized that their passenger remained loyal to airline brands and flew first class in their subsonic aircraft. The maintenance and fuel costs of Concorde per person were too high than other Aircraft. There were many environmental issues like it could do supersonic only on the international waters which limited and network to flying supersonic above other continents. It produced nitrogen oxide in its exhaust which would make complicated interactions with other ozone, convert the result in degradation. There was no keen interest by British and France to upgrade the Aircraft or technology. Concorde was the only aircraft in 2000 which housed a flight engineer- a position eliminated by all commercial Aircraft due to sophistication of cockpit instruments while entire world had moved into digital glass cockpits and it still flew with analog instruments and gauges in cockpit. And the main and important conclusion that it was not affordable to everyone.