Discover Changing Times at The Times Square on Your USA Vacation 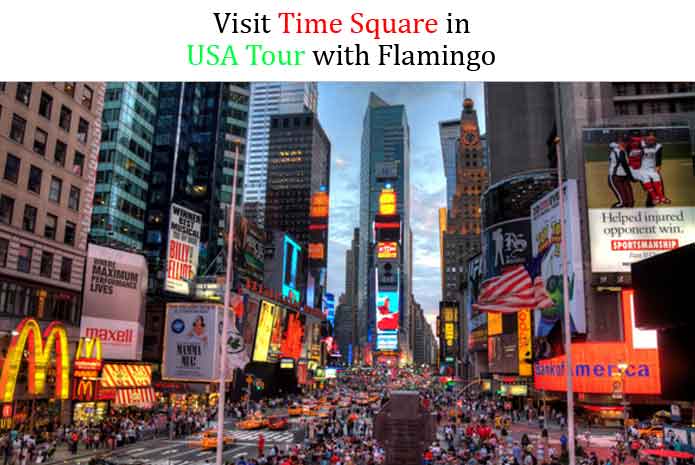 TIMES SQUARE – THE CROSSROADS OF THE WORLD

TIMES SQUARE – The world’s busiest pedestrian crossroads is located in mid-town Manhattan, New York City. In 1904, the New York Times built the Times Tower on 43rd street just off Broadway to replace its downtown premises. The square in front of the building was called Longacre square, but was soon renamed Times Square. The area is at the junction of Broadway and 7th Avenue which is stretched from West 42nd Street to West 47th Street. It is one of the New York City’s major gathering spot which attracts visitors with its ambiance and dazzling lighted billboards and advertisements.

Times Square is the most happening place in New York with Broadway Theater, Cinemas, Shopping Center and super signs, it is one of those place which makes New York City that never sleeps. More than 39 million people visit the square annually including tourist and people working in the area and is world’s most visited tourist attraction.

The square is also very famous for its Broadway Theater District which is commonly known as Broadway, having 40 professional theaters which presents theatrical performances of Musical shows and Drama. Below are some famous shows of Broadway that attracts more visitors to Times Square:

Since 31st December 1907, Times Square celebrates New Year’s Eve, the event is known as Ball Drop. Begin at 11.59 PM ball descends 141 feet down in 60 seconds and resting at midnight to signal the start of the New Year. Millions of visitor participate and observe the event with amazing fireworks.

Shooting in America is the hottest trend of Bollywood Industry, many movies have been shooted in different locations of America. In which one of the location is Times Square, here are the famous Indian movies shooted on Times Square – Jaan-e-mann, Tara Rum Pum, Kal Ho Naa Ho, Jo Bole So Nihaal, Love at Times Square, Out of Control.

Sounds exciting right?? Yes, Times Square is really very exciting place to visit in New York. You can enjoy at Times Square in our American Group Tours. For more information you can visit www.FlamingoTranswold